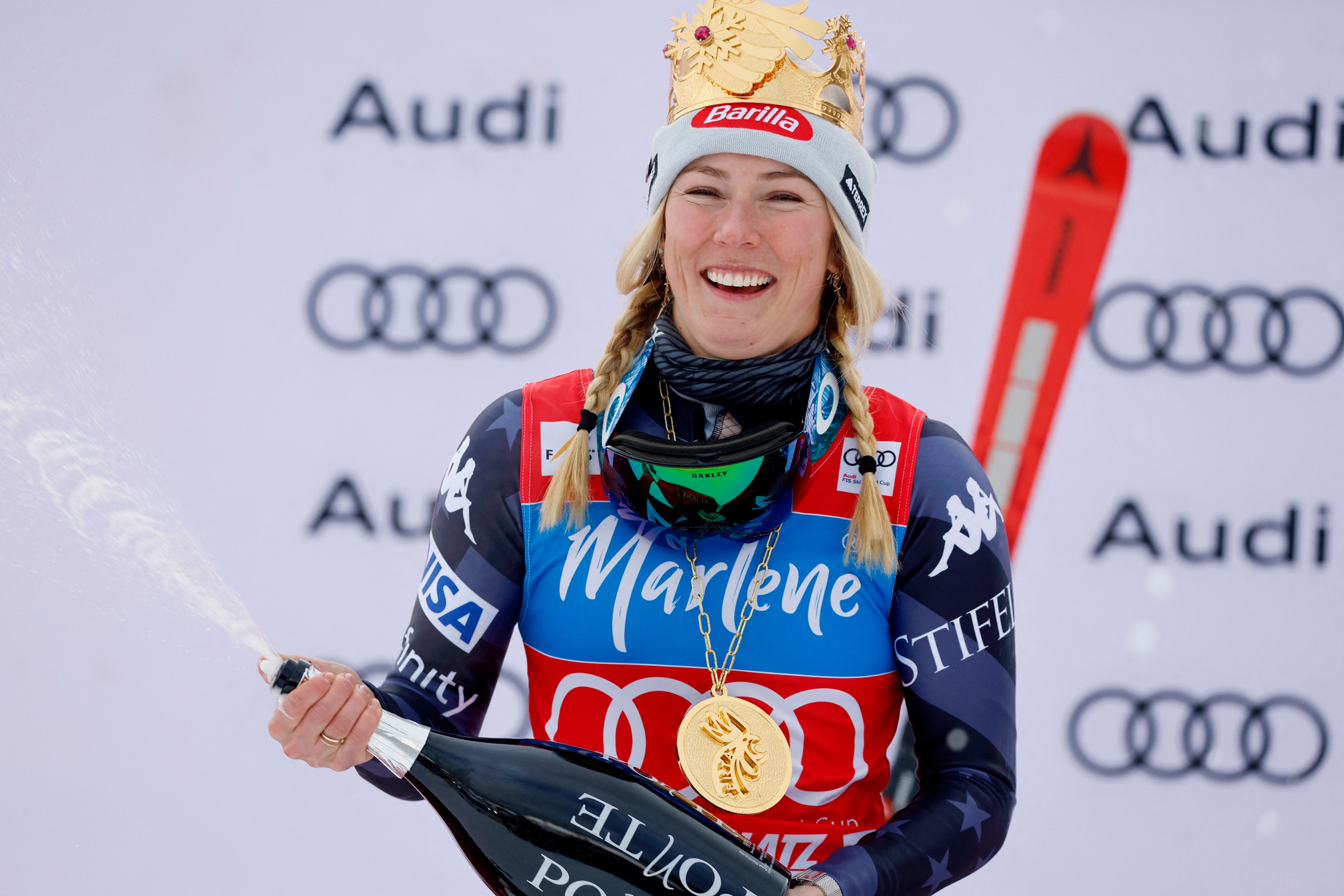 Mikaela Shiffrin reached the summit of ski racing on Tuesday, passing fellow American Lindsey Vonn with victory in the giant slalom at Kronplatz to become the most successful female Alpine skier in World Cup history with an 83rd title.Thomson Reuters

The victory puts the 27-year-old just three wins away from the all-time record held by Ingemar Stenmark of Sweden, who captured 86 World Cup wins between 1974 and 1989.

Eclipsing Vonn is the latest history-making achievement by the twice Olympic gold medallist and four-time overall World Cup champion, who could potentially end her career with more than 100 victories on the ski racing circuit.

Born in Vail, Colorado to ski racing parents Eileen and Jeff, the child prodigy won her first World Cup in Are, Sweden in 2013 as a 17-year-old high school student and went on to claim the first of her six season titles in slalom later that year.

At the Winter Olympics in Sochi in 2014, she made history by becoming the youngest ever winner of an Olympic slalom gold medal, managing to somehow correct herself mid-air during her second trip down the mountain to claim victory.

She ended that season as the Olympic, World Cup and world champion in slalom and her profile grew considerably as media appearances and sponsorships began to pile up for the amiable 18-year-old star.

Experts said that if Shiffrin could stay healthy in the perilous sport, she could make a run at the record books and indeed her durability has been a key asset.

Shiffrin has enjoyed relatively few injury setbacks, the most notable being a right knee injury she suffered during a fall in December 2015 that kept her away from the tour for two months and back pain that hampered her 2021 season.

A powerful and precise skier, Shiffrin is the only athlete to win World Cups in all six disciplines - downhill, super-G, alpine combined, giant slalom, slalom, and parallel.

Shiffrin's first real taste of professional disappointment came at the 2018 Winter Games in Pyeongchang where she was heavily favoured to successfully defend her slalom title but surprisingly only managed a fourth-place finish.

However, she won an unexpected gold in giant slalom and capped off her second Games with a silver in the combined to leave South Korea with her head held high.

Tragedy struck when her father Jeff died unexpectedly in February 2020 aged 65 after an accident at home. Upon hearing the news Mikaela left Europe and flew back to Colorado to be by his hospital bedside with her mother and older brother Taylor.

Her supportive father who was often seen taking pictures at the finish line was the "CEO of Mikaela Shiffrin the ski racer," she told Reuters in an interview in May 2020, since he handled her finances and worked closely with her agent.

Her mother also had a huge impact on Shiffrin's career, serving as her ski coach until 2019.

The 2022 Olympics proved a low point in Shiffrin's otherwise sparkling career and the ultimate test of her fighting spirit.

She glided into the Beijing Games with enormous expectations heaped on her shoulders as she favoured to win gold in at least three events but stunningly fell in three races and left China empty-handed.

Shiffrin bounced back quickly after the disappointment, urging her fans to use her Olympic struggles as a reminder to "Get up, again. Again. Again."

"I think that reflects her level of professionalism," Tiger Shaw, former president and CEO for U.S. Ski and Snowboard, who has known Shiffrin since she was born, told Reuters.

Her mettle intact, she went on to win her fourth overall World Cup title later that year.

Shiffrin got her run for the record books off to a hot start this season, quickly seizing the lead in the overall World Cup standings before matching Vonn's record with a giant slalom victory in Kranjska Gora, Slovenia on Jan. 8.

Now she has her sights set on toppling Stenmark.