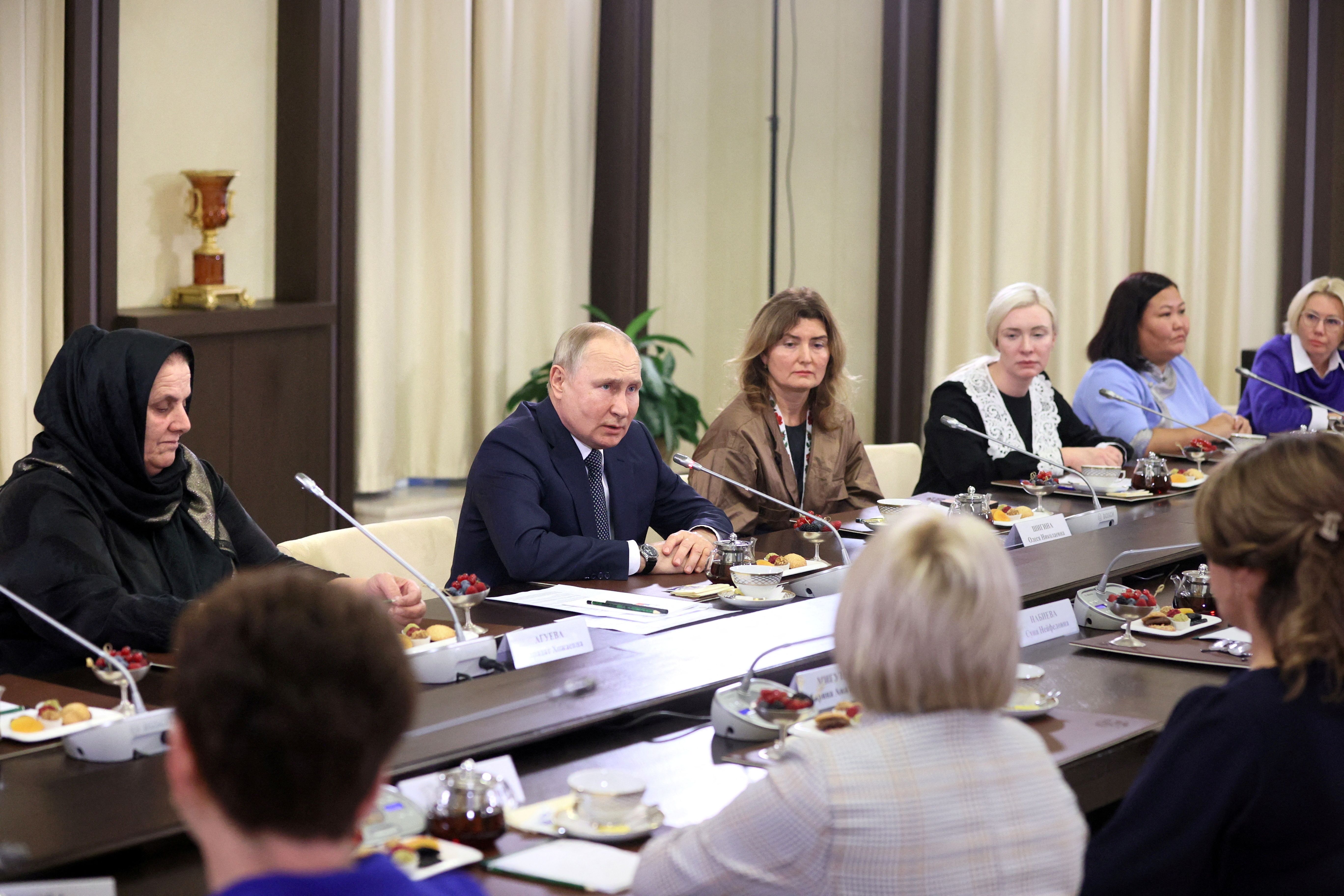 Putin tells mothers of soldiers killed in Ukraine: 'We share your pain'

President Vladimir Putin on Friday met with more than a dozen mothers of Russian soldiers fighting in Ukraine, telling those who had lost sons that he and the entire leadership shared their suffering.

The war in Ukraine has killed or wounded tens of thousands of soldiers on both sides, according to the United States, and the Russian invasion has triggered the biggest confrontation between Moscow and the West since the 1962 Cuban Missile crisis.

Hundreds of thousands of Russians have been sent to fight in Ukraine - including some of the more than 300,000 who were called up as part of a mobilisation announced by Putin in September.

Meeting with 17 women at his Novo-Ogaryovo residence outside Moscow to mark Sunday's Russian Mother's Day, Putin was shown in a short pre-recorded clip sitting with them around a table laden with tea, cakes and bowls of fresh berries. Many smiled as Putin entered.

Putin said he understood the anxiety and concern of soldiers' mothers - and the pain of those who had lost sons in Ukraine.

"I would like you to know that, that I personally, and the whole leadership of the country - we share your pain," Putin said.

"We understand that nothing can replace the loss of a son - especially for a mother," he added, breathing heavily and frequently clearing his throat. "We share this pain."

The mothers listened to what appeared to be Putin's introductory remarks but their comments to him were not immediately shown.

Putin has said he has no regrets about launching what he calls Russia's "special military operation" against Ukraine and casts the war as a watershed when Russia finally stood up to an arrogant Western hegemony after decades of humiliation in the years since the 1991 fall of the Soviet Union.

Ukraine and the West say Putin has no justification for what they cast as an imperial-style war of conquest. Ukraine says it will fight until the last Russian soldier is banished.

In what appeared to be an attempt to counter online reporting about Russian forces' problems in the war, Putin urged the mothers to distrust the internet.

"You can't trust anything there at all, there are all sorts of fakes, deception, lies," Putin said.

He praised their sons for defending what he called Novorossiya, literally "new Russia", a loaded term from the tsarist empire that modern Russian nationalists use to describe a swathe of southern and eastern Ukraine that Russia now claims.

Putin said he sometimes called Russian soldiers at the front, and that their words had made them heroes in his eyes.

But some relatives of soldiers killed in the war said the Kremlin had ignored their pleas for a meeting.

"The mothers will ask the 'correct' questions that were agreed beforehand," Olga Tsukanova, head of the Council of Mothers and Wives, said in a message on Telegram before the meeting.

"Vladimir Vladimirovich - are you a man or who are you? Do you have the courage to meet us face to face, openly, not with pre-agreed women and mothers who are in your pocket, but with real women who have travelled from different cities here to meet with you? We await your answer," Tsukanova said.

Russia last publicly disclosed its losses in the war on Sept. 21, when Defence Minister Sergei Shoigu said 5,937 Russian soldiers had been killed. That number is far below most international estimates.

The United States' top general estimated on Nov. 9 that Russia and Ukraine had each seen more than 100,000 of their soldiers killed or wounded. Ukraine does not disclose its losses.