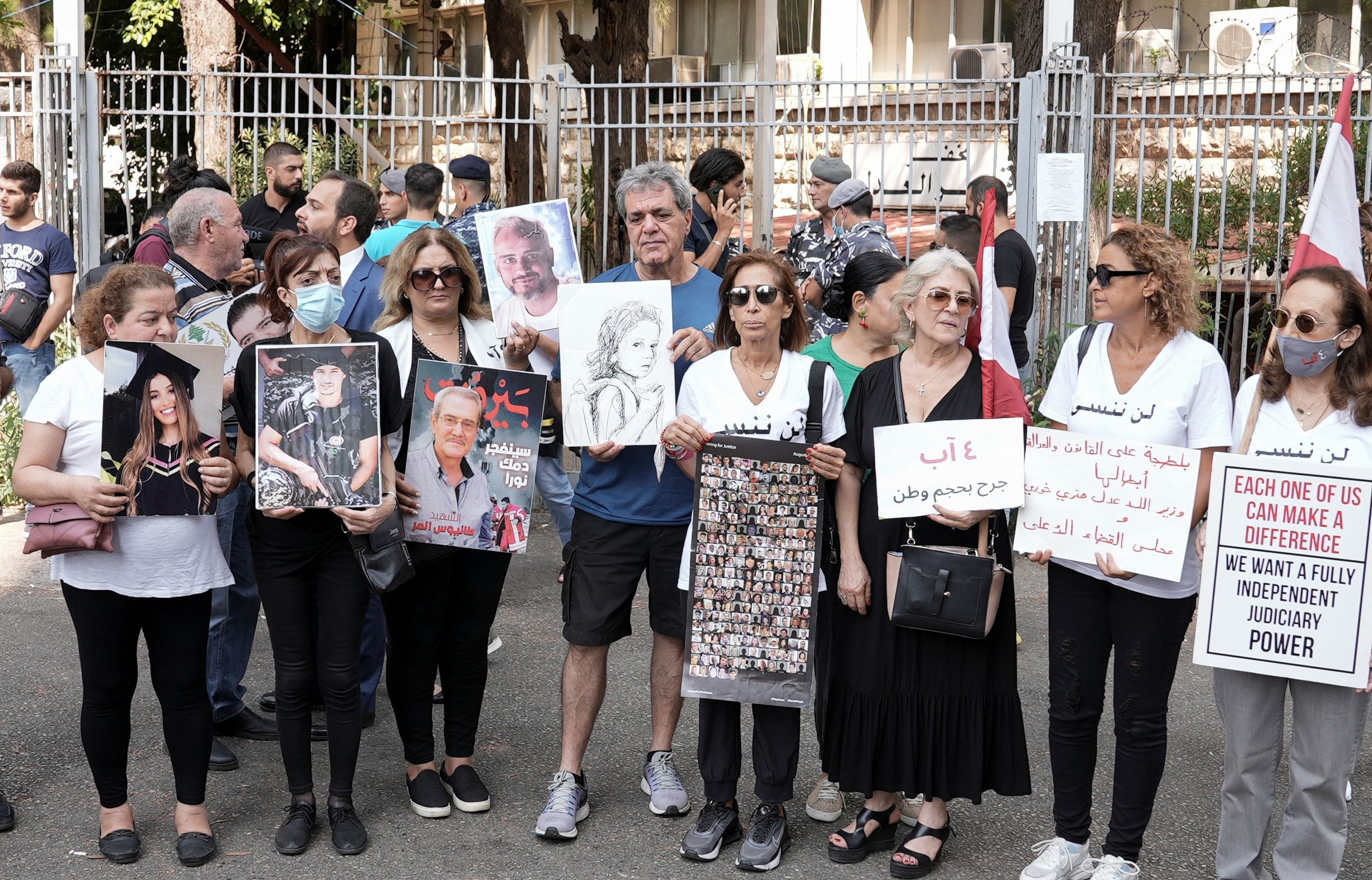 The judge probing the 2020 Beirut blast has charged Lebanon's top public prosecutor, the then-premier and other senior current and former officials in connection with the devastating explosion, judicial sources said and court summons show.[1/2] Relatives of some of the victims of the August 2020 Beirut port blast carry their pictures and banners during a protest outside the Justice Palace, in Beirut, Lebanon September 7, 2022. REUTERS/Issam Abdallah/File Photo

Judge Tarek Bitar unexpectedly resumed an inquiry on Monday after it was paralysed for more than a year by political resistance and legal complaints filed by top officials he was seeking to question.

The explosion on Aug. 4, 2020 was caused by hundreds of tonnes of ammonium nitrate that had been stored at the port in poor conditions since it was unloaded in 2013. So far, no senior official has been held to account.

It was not immediately clear what they had been charged with, but one judicial source said Bitar had found Oweidat had not acted responsibly with regards to the ammonium nitrate.

Reuters could not immediately reach Diab or Oweidat for comment. Ibrahim declined to comment on reports he had been charged when contacted by Reuters on Monday.

All those previously charged by Bitar have denied wrongdoing.

Oweidat on Tuesday sent Bitar an official letter saying that Bitar's probe remained suspended and that no official decision had been taken on whether he could continue investigating, according to a copy of the correspondence seen by Reuters.

Differing opinions within the judiciary over whether Bitar was allowed to resume his probe mean that some of his decisions could go unimplemented, analysts say.

Bitar's previous efforts to interrogate top officials over the explosion that killed 220 people and shattered parts of Beirut have been hindered by factions including the heavily armed, Iran-backed Hezbollah.

A source with knowledge of Hezbollah's position noted Oweidat's letter and said that accusing the country's top prosecutor "would only deepen the crisis."

The source said the party would "wait and watch the reactions."

Hezbollah has campaigned against Bitar as he sought to question its allies and it also accused Washington of meddling in the probe.

The U.S. ambassador has denied the accusation. The embassy on Tuesday tweeted that the United States "support and urge Lebanese authorities to complete a swift and transparent investigation" into the blast.

The Lebanese judiciary, where appointments depend largely on political backing, has long been prone to political influence.

Bitar's investigation was paralysed in early 2022 by the retirement of judges from a court that must rule on several such complaints against Bitar before he can continue.

The court has been awaiting the appointment of new judges to resume its work, a step authorities have not taken.

Bitar met French judges visiting Beirut last week as part of a French investigation into the explosion, whose victims included two French nationals. He was unable to share documents with them at the time because the investigation was frozen.

Bitar resumed work on the basis of a legal interpretation challenging the reasons for its suspension, the judicial sources said.

Diab, an academic, became prime minister in January 2020 and resigned less than a week after the blast.

Bitar's predecessor swiftly charged him and several former officials with negligence over the chemicals, but that judge was removed in 2021 following political interference in the file.

Diab said in a statement in 2020 that he was confident his hands were clean and that he had dealt transparently with the file of the Beirut port explosion.

Bitar has scheduled questioning with 15 people throughout the month of February, according to judicial sources.

But legal experts and even relatives of victims expect him to encounter continued pushback.

Nizar Saghieh of watchdog NGO Legal Agenda said officials may try to dispute the legitimacy of Bitar's resumption, while the judiciary or security forces could refuse to carry out procedural steps for the charges to be served.