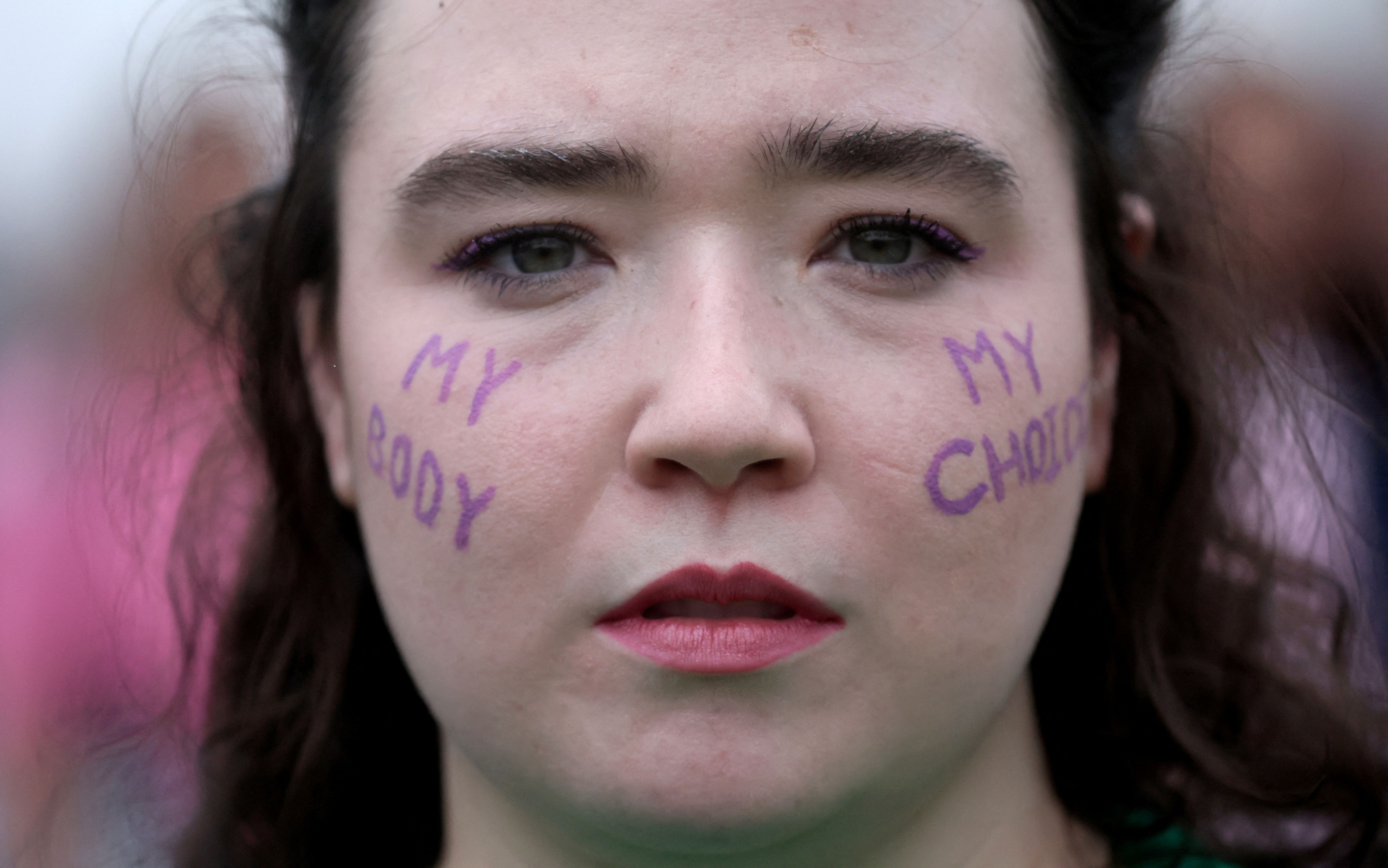 'I'm outraged': Voices from abortion-rights protests across the U.S.

Thousands of abortion rights supporters are protesting across the United States on Saturday, starting what organizers said would be "a summer of rage" if the U.S. Supreme Court overturns the Roe v. Wade case that legalized abortion nationwide.Abortion rights protesters participate in nationwide demonstrations following the leaked Supreme Court opinion suggesting the possibility of overturning the Roe v. Wade abortion rights decision, in Los Angeles, California, U.S., May 14, 2022. REUTERS/Aude Guerrucci

Here are some voices from the rallies in New York, Washington, Atlanta and Los Angeles:

Gabriela Fraga, 35, held a "pregnant by choice" sign at New York's rally. Fraga, who was born and raised in a Catholic family in Peru, is 32-weeks pregnant and said she has always been very pro-choice.

"I believe in the fundamental right of all people who are able of bearing children to make decisions. That belief has only further solidified going through pregnancy myself," she said.

"I only became pregnant when I became pregnant because I had the conditions - material, emotional, psychological - to allow for a good life for this child that I'm very excited to have."

Jillian Larussa, 27, said Roe v. Wade should be made into law "because this is healthcare."

"This isn't the end," she said as she marched over the Brooklyn Bridge. "This is gonna happen for gay marriage, it's gonna happen for contraceptives so it's important we hit the streets and we fight against it before we lose rights."

Elizabeth Leek, a 75-year-old massage therapist, was holding a sign that read "Grandma Says Respect Women's Choices" and wearing a flower crown at the "Bans Off Our Bodies" rally in front of the Washington Monument.

Leek said she almost died from an unsafe abortion when she was 18, before Roe v. Wade. Now she feels "outrage" and is scared for her six grandchildren. She said she is fighting for them to have healthcare and bodily autonomy.

"It breaks my heart," she said of the court's draft opinion. But she still felt buoyed by the crowd of people, old and young, who were out to protest on Saturday.

Brita Van Rossum, a 62-year-old landscape designer, had come to the Washington protest from her home in the suburbs of Philadelphia.

She said it was her first time protesting specifically for abortion rights.

"I'm outraged," she said. "If you can't choose whether you want to have a baby, if that's not a fundamental right, then I don't know what is."

Patricia Fulton, a 52-year-old graphic designer from the Atlanta suburb of Roswell, said, "I am angry and I'm going to stay angry."

Fulton, who was at the rally across from Georgia's statehouse, said the U.S. Democratic Party needed to be stronger if Roe V. Wade were to be defended.

"There's public outrage, but we need more leadership from those who can do something," Fulton said.

Malcolm DeCesare, 34, an intensive care nurse from New York who was at the rally across from Los Angeles' City Hall, said that, as a healthcare worker, "I understand and believe very strongly that we are only ever able to ban safe abortions.

"By banning abortion, or even proposing to ban abortion, we are relegating a whole population of women to the Dark Ages," said DeCesare. "We are putting them at great risk."

Shannon Flaherty, a 52-year-old who was studying nursing after years as a homemaker, was attending the Los Angeles protest with her 16-year-old daughter Piper and two of her daughter's friends.

She said she and her own mother "have lived with men making decisions for our bodies and our lives for a long, long time and it's got to end.'"

Piper said the draft decision was a sign that history was moving in reverse.

"It just makes me really angry that people want to control this especially when there are so many other things that people could be doing to save people's lives like overturning the death penalty or providing free healthcare," she said.