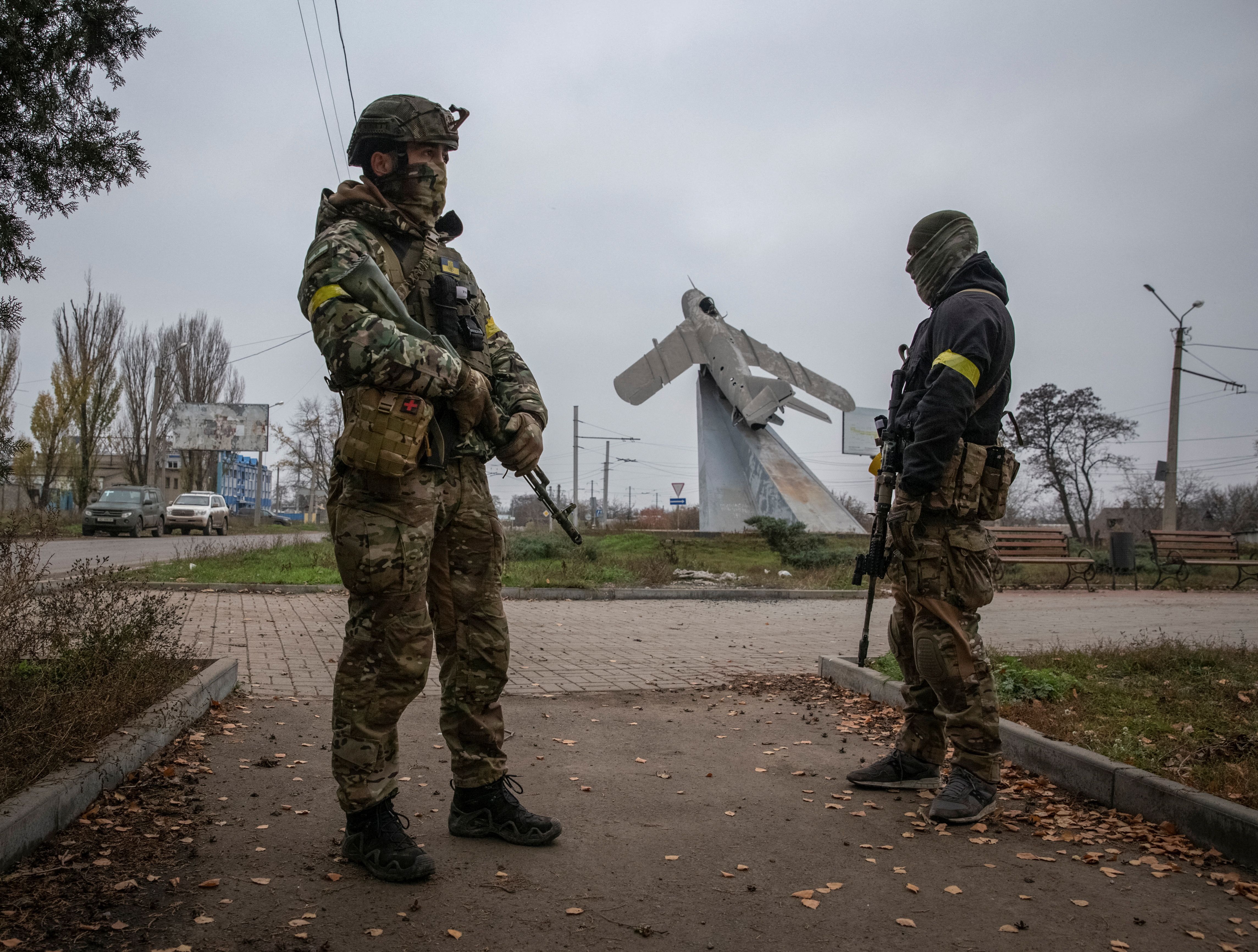 Chechens fighting for Ukraine see chance to 'free' their homeland

Speaking amid the boom of artillery on Ukraine's frontlines, the masked soldier said his ultimate goal was to liberate a land farther east - the Russian republic of Chechnya.[1/3] Members of the pro-Ukrainian Chechen battalion check an area, amid Russia's attack on Ukraine, in the town of Bakhmut, Ukraine November 11, 2022. REUTERS/Oleksandr Ratushniak

Maga, his nom-de-guerre, is part of a unit of Chechen fighters helping Ukraine battle Russian troops in eastern Ukraine.

Many of his kinsmen also famously support the other side - powerful Chechen leader Ramzan Kadyrov calls himself Russian President Vladimir Putin's "foot soldier" and sent members of his personal army to Ukraine to fight for the Russians.

Kadyrov has also been a vocal critic of Russia's performance in the conflict so far and said Moscow should consider using a low-yield nuclear weapon in Ukraine, setting alarm bells ringing in the West.

For Chechens under Ukrainian military command, the hope is that a victory in the war could spark political crisis in Russia and, with it, the downfall of Kadyrov, who some governments including the United States have accused of human rights abuses.

Kadyrov has denied the charges.

"We're not fighting just for the sake of fighting," said Maga, who declined to give his real name for security reasons.

"We want to achieve freedom and independence for our peoples," he added, referring to Chechens and other ethnic minorities in the Caucasus region.

His unit is one of several battalions of ethnic Chechens that have joined forces with Kyiv, some of them since 2014 when Moscow-backed separatists seized territory in eastern Ukraine.

Most of the fighters are from Europe, where they or their relatives sought refuge during the two Chechen wars that followed the Soviet Union's collapse.

Younger members are children of those who fought or were killed in the conflicts, Maga said, while older ones have direct combat experience.

Unlike Kadyrov's troops, who have posted videos about their exploits in Ukraine on social media, they keep a low profile and say the brutal reputation in both Chechnya and Ukraine of the "Kadyrovites", as they are known, has sullied the image of Chechens.

Kadyrov says he brought an end to the bloodshed which plagued Chechnya in the two decades following the 1991 fall of the Soviet Union, restoring loyal relations with the Kremlin, destroying militants and rebuilding the republic’s economy.

He did not immediately respond to questions for this article.

Some experts say Kadyrov's power has been cemented through a combination of violence, Kremlin patronage and propaganda.

His father, Akhmad, was installed by Putin to restore order after two wars ravaged the mountainous region.

Ramzan took over following his father's assassination in 2004 to finish stamping out an Islamist insurgency and has closely tied modern Chechen culture to his personal leadership, said Caucasus researcher Cerwyn Moore.

"It would take quite a lot to change that sort of dynamic," said Moore, a senior lecturer of international relations at the University of Birmingham.

That has not extinguished hope among Kadyrov's opponents, including Chechens fighting Russian forces in Ukraine, that the authoritarian "power vertical" which Putin has built could crumble if Moscow lost in Ukraine.

Ukrainian authorities have sought to exploit those hopes. In September, President Volodymyr Zelenskiy appealed to non-ethnic Russians, specifically Caucasians, to refuse to join Putin's army and "defend your freedom now in the streets and squares".

Weeks later, Ukraine's parliament voted to recognise what it called the Russian occupation of the short-lived Chechen Republic of Ichkeria, which won de-facto independence from Moscow after the first Chechen War in the mid-1990s.

It is led by a government-in-exile whose head, Akhmed Zakayev, told Ukrainian media last month that he was often in Kyiv to meet Ukrainian officials and considered Chechen units fighting for Ukraine as a vanguard.

"The armed forces of the Chechen Republic of Ichkeria are being renewed here today," he told the Ukrainian service of Radio Free Europe/Radio Liberty on Oct. 24.

According to Moore, Zakayev's movement is "fragmented" and currently poses little threat to Kadyrov.

But he added that the current war provided an opportunity for a younger generation, including those fighting in Ukraine, to explore their culture separately from the Chechen strongman.

"The fact that they are carving out even a sort of semi-virtual sense of identity under the umbrella of Ukrainian resistance to Russia is doing something quite powerful," he said.

That effort was aided by what another fighter in Maga's unit, who identified himself as "Tor", described as a Caucasian community in Russia that was technologically connected and politically curious.

For now, he said, many in the Caucasus region subscribe to the official position, broadcast widely on state media, that Russia is a bulwark against Western aggression. But he added that a new reckoning would come.