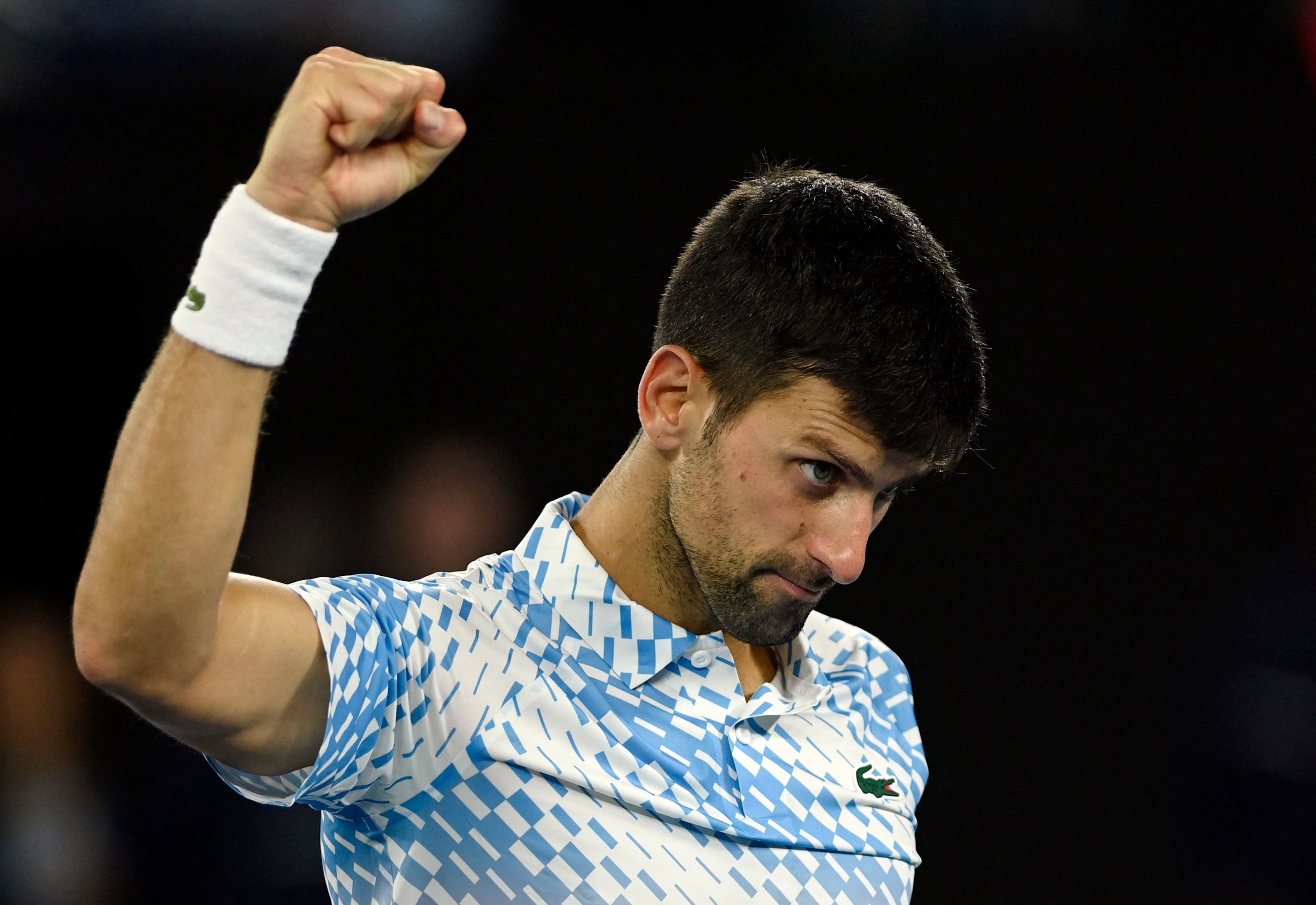 Novak Djokovic continued making his quest for a record-extending 10th Australian Open title look like a walk in the park by demolishing Andrey Rublev to reach the last four on Wednesday.

The Serb, still wearing a thigh strapping but looking supreme, raced to a 6-1 6-2 6-4 victory with a performance that would have been uncomfortable viewing for American Tommy Paul.

Unseeded Paul won 7-6(6) 6-3 5-7 6-4 in an All-American quarter-final clash against 20-year-old Ben Shelton to advance to the semi-finals of a major for the first time.

A disbelieving Magda Linette continued her dream Australian Open run by stunning former world number one Karolina Pliskova to set up a semi-final against Aryna Sabalenka.

Fifth seed Sabalenka, the only top-10 seed left in the women's draw, earned her spot in the semi-finals by outmuscling Donna Vekic 6-3 6-2 in a ferocious battle of big hitters on a baking Rod Laver Arena.

Djokovic is making a mockery of the theory that the second week of Grand Slam tournaments get tougher.

In the last 16 he dropped five games against home hope Alex de Minaur and he was just as ruthless against Rublev as he made it 25 successive wins in succession at the Australian Open.

"I would rank this as very close to the performance of two nights ago," Djokovic said on court. "I'm playing very solid from the back of the court and really love these conditions.

"The scoreline maybe in the first two sets tonight didn't show the reality of the match. But all the important moments I found my best tennis."

Paul is only the third active American man to reach a Grand Slam semi-final, joining John Isner (2018 Wimbledon) and Frances Tiafoe (2022 U.S. Open) but will have to register a seismic shock if he is to go any further.

"I'm really excited, man. It's really cool. I think it's even cooler if I do play Novak," the 25-year-old Florida-based Paul said after his victory.

Paul, the first American man to reach the semi-finals in Melbourne since Andy Roddick in 2009, withstood some ferocious serving from Shelton who banged down 24 aces.

"Ben's tough to play against and he's going to be in many matches like this," Paul said.

Paul is not the only unseeded player in to the semis.

The unheralded Linette, ranked 45th in the world, played wonderfully controlled tennis to wrap up a thoroughly deserved 6-3 7-5 victory over powerful Czech Pliskova.

Linette, who had never been beyond the third round at a Grand Slam and had been expected to play second fiddle to fellow Pole Iga Swiatek at Melbourne Park, will now face Sabalenka on Thursday to decide who meets either Victoria Azarenka or Elena Rybakina in the final.

"It's so much and I can't really believe it," the 30-year-old said. "I will never forget this. I'm breaking through some really difficult things for me. This will stay with me for life. So I'm really grateful."

Sabalenka later took her chances in a physical one-hour first set littered with break points before running away with the second to reach her fourth Grand Slam semi-final, but first in Melbourne.

Vekic had held a 5-1 career record against the Belarusian but was unable to match the level of the new, improved Sabalenka with 13 double faults not helping the Croatian's cause.

Sabalenka also made plenty of errors but her once-fragile serve was largely solid, and when she got her explosive forehand going it was always going to be hard for Vekic to cope.

Two double faults as Sabalenka served for the match were a sign of nerves but the 24-year-old saved three break points and sealed the win with a huge forehand that struck the running Vekic in the body.

"I think it was because I was calm and I expected this game from her, so I was able to stay in the game no matter what. That was the key," she said of her victory.

Linette had no problems serving out her quarter-final against twice Grand Slam finalist Pliskova, whose 36 unforced errors sabotaged yet another bid to win a first major.

"She really played well from the baseline," said Pliskova. "I just didn't find any space in the court to go for my winners. Obviously the serve was not great today at all."