France’s Macron to Address Nation in Wake of Violent Protests

French President Emmanuel Macron will address the nation at 8 pm today in response to massive, often violent rallies staged by “yellow-vest” protesters across the country for the past four weekends, VOA news reports.

Before the speech Monday evening, Macron plans to meet with union officials, local lawmakers and business leaders for talks on formulating a response to the protests that have rocked the country during the holiday season.

Workers across France Sunday cleaned up the debris from protesters who threw rocks, burned cars and vandalized businesses through the weekend.

Earlier Sunday, France’s foreign minister urged U.S. President Donald Trump not to interfere in French politics, following Trump’s tweets on weeks of protests in Paris in which he said:

“Very sad day & night in Paris. Maybe it’s time to end the ridiculous and extremely expensive Paris Agreement and return money back to the people in the form of lower taxes? The U.S. was way ahead of the curve on that and the only major country where emissions went down last year! ”

Very sad day & night in Paris. Maybe it’s time to end the ridiculous and extremely expensive Paris Agreement and return money back to the people in the form of lower taxes? The U.S. was way ahead of the curve on that and the only major country where emissions went down last year!

An earlier tweet from Trump insinuated that protesters in Paris sided with his decision to leave the Paris agreement — a landmark 2015 agreement between over one hundred countries to combat climate change.

“The Paris Agreement isn’t working out so well for Paris. Protests and riots all over France. People do not want to pay large sums of money, much to third world countries (that are questionably run), in order to maybe protect the environment. Chanting “We Want Trump!” Love France.” he wrote.

Nearly 2,000 people were arrested Saturday across France in the latest round of “yellow-vest” protests.

Nationwide, the interior ministry says some 136,000 people rallied against France’s high-cost of living. Protesters also expressed their dismay with the presidency of Emmanuel Macron.

Protests were held in a number of cities besides Paris, including Marseilles, Bordeaux, Lyon and Toulouse. 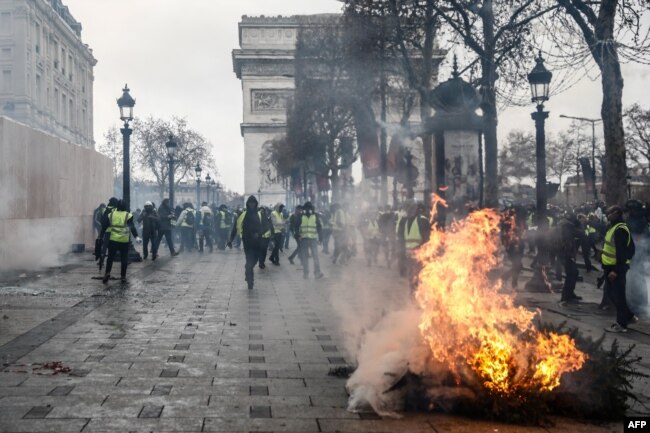 France closed the Eiffel Tower and other tourist landmarks and mobilized tens of thousands of security forces for the fourth week of violent demonstrations. 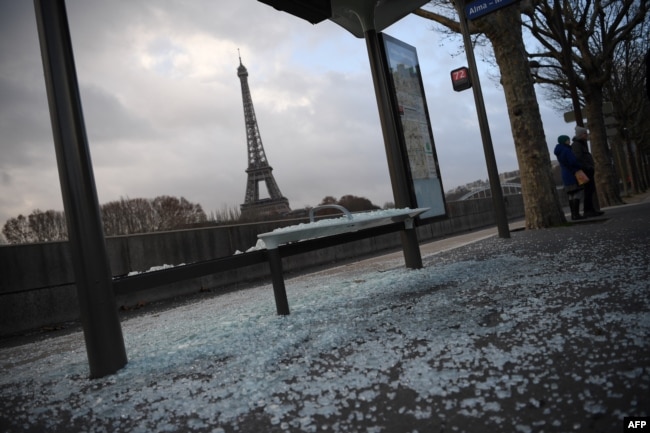 Many shops in Paris were boarded up before Saturday’s protests to avoid being smashed or looted, and police cordoned off many of the city’s broad boulevards.

President Macron made an unannounced visit Friday night to a group of anti-riot security officers outside Paris to thank them for their work.

The protests erupted in November over a fuel tax increase, which was part of Macron’s plan to combat global warming.

French Prime Minister Edouard Philippe called for new talks Saturday with representatives of the “yellow vest” movement. He vowed the government would address their concerns over rising living costs.

“The president will speak, and will propose measures that will feed this dialogue,” Philippe said in a televised statement.

Since the unrest began in November, four people have been killed in protest-related accidents. 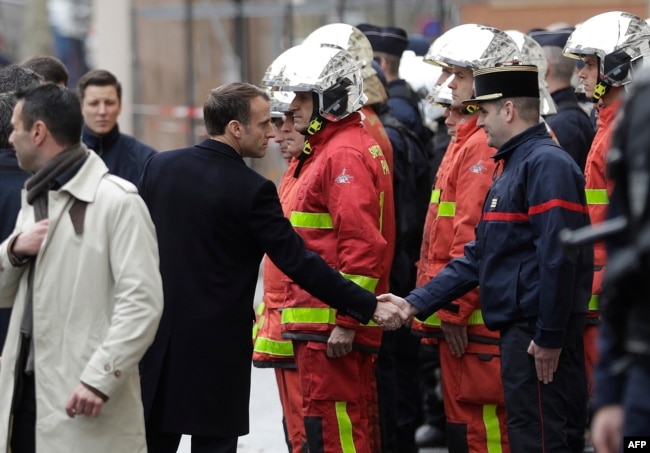 While Macron has since abandoned the fuel tax hike, protesters have made new demands to address other economic issues hurting workers, retirees and students.

Government officials are concerned the repeated weekly violence could weaken the economy and raise doubts about the government’s survival.

The “yellow vest” movement was named after the safety jackets French motorists are required to keep in their vehicles, which the protesters wear at demonstrations.

The weeks of protests have exposed intense resentment among non-city residents who feel that Macron, a former investment banker, is out of touch with struggling middle-class and blue-collar workers.

Hundreds of dead dolphins washed up on French coast

Hundreds of dead dolphins washed up on France’s Atlantic coast with many more predicted to come, according to a French monitoring group…

EDF SA, a French energy company, said that it had completed the shut down of one reactor at its oldest…

French President Emmanuel Macron on Friday called for a summit on Syria with Germany, Russia and Turkey to take place…

French Pension Reform to be Debated in Parliament